“In 1961 the small south Atlantic island community of the UK dependency Tristan da Cunha experienced a dramatic volcanic eruption. It led to the evacuation of the entire community to the UK where they remained until their return in 1963. A critical factor in the decision of the islanders to forsake the UK and return to the South Atlantic was their reaction to the media representations of themselves and their ‘way of life’’. Furthermore, an important element in the furtherance of their request for repatriation was the advocacy of their case in the media by influential supporters. This research project offers a unique focus on key aspects of the media representation of the island and islanders through the 1961-1963 debate on the future and the viability of the Tristan da Cunha community, including the key role played by advocates supporting the islanders cause. The study offers a timely opportunity as the 50th anniversary of the evacuation approaches to reflect on the representations of island living, sustainability and its advocacy then as well now.”

This (British Academy) small grant funded project is now complete in respect of the archive data sourcing, collection and preliminary analysis. Related research exchange and dissemination have already taken place and a number of other activities and outputs are under development for late 2013  – the year of the 50th anniversary of the Tristan islanders return in 1963. It is hoped that continued research activity will emerge from this small grant project.

Several research papers have been delivered to a range of academic conferences including  MECCSA Derry 2013;  Island and Islanders, Island Studies Conference Gabriola Island BC, Canada 2013; Scottish Media and 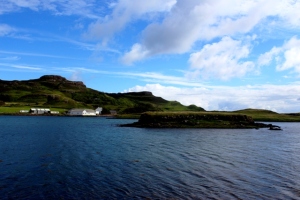 Communication Association Glasgow 2013. In addition, several illustrated talks and lectures have been given as part of our knowledge exchange and cultural brokerage remit most especially with island communities. In particular invited talks have been given as part of the Shetland Museum and Archive 2013 programme, and in August an illustrated talk on the island of Canna as part of Feis Cannaidh 2013 (image shows Canna Farm and St Joseph’s Church). An interview by the research team was given to BBC Shetland in March 2013 on the project and its findings in relation to the Shetland dimension of the Tristan evacuation in 1961. Field sites  for archive research of both government files, newspapers film.sound archive, as well as personal paper collections  have been undertaken in a range of institutions and sites including Southampton, Shetland Archives, Canna House – National Trust Scotland,  as well as the National Library Scotland, Glasgow’s Mitchell Library, British Library at Collingdale and Sweden’s National Library – Kungliga biblioteket, Stockholm.

November 2013 is the 50th anniversary commemoration of the return of the islanders as a community  to Tristan da Cunha in 1963. The Scottish Centre for Island Studies is hosting a one day research and knowledge exchange event in Glasgow in honour of the islanders’ successful return and resettlement in 1963. More details of this event can be found by clicking this link.